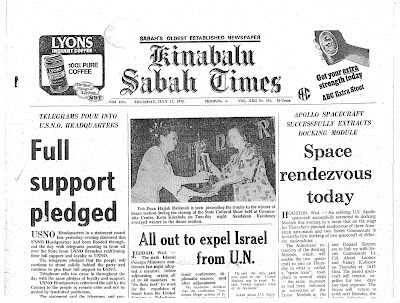 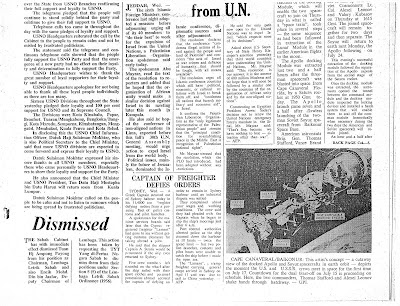 A day after Berjaya's launch, while party president Datuk Harris Salleh was busy campaigning away in Labuan, all Usno could manage was to come out with a statement which was seen by many as more of a damage control or public relations exercise. "Telegrams pour into Usno Hqs - Full support pledged", said the front page of the Usno-controlled Kinabalu Sabah Times on July 17, 1975, the day its rival Daily Express highlighted Berjaya's conquest of Labuan.

I say 'damage control', a public relations term because although the statement claimed that 16 Usno divisions throughout the State pledged their "loyalty and 100% support for Usno and its Supreme Council", the statement came from only one man - the Usno Information Chief, Datuk Haji Sulaiman Mokhtar who was also the Political Secretary to the Chief Minister. None of the 16 divisional leaders came out in the open to make their statements individually or had their photographs taken by the Press. In other words, Usno's claims were not verified. Also, why only 16 divisions when there were 32 State constituencies?

Through Sulaiman's statement, Usno also admitted for the first time since Berjaya's launch that Chief Minister Tun Datu Mustapha was not in the State when it said that he "will return soon from Kuala Lumpur" when in fact he was overseas. Thus, the earlier statement purportedly issued by the Chief Minister and front-paged by Daily Express on the eve of Berjaya's launch was in fact Syed Kechik's statement. (See my July 24th posting titled 'Just Rumours?') In fact too, it was to become part of Berjaya's campaign material that Mustapha was most of the time running Sabah using 'remote control' from overseas through Syed Kechik. And who was this Syed Kechik and why was he so powerful? Especially when his name doesn't sound Sabahan? More about this man in my future postings. Meanwhile, you would also notice that instead of the statement coming from the Alliance party, it was only from Usno, asking the people to continue to support Usno as if it was the sole ruling party. There was completely no mention of its coalition partners, the Sabah Chinese Association (SCA) and the Sabah Indian Congress (SIC). This was also used to Berjaya's advantage during the election whereby the SCA candidates lost heavily. There was no SIC candidate.

You would also notice that the front page also reported that Haji Ampong Puyon (now Datuk) and Mohd Din Jaafar (now the late Datuk) had been dismissed with immediate effect as Chairman and Deputy Chairman respectively of the Sabah Electricity Board or LLS. The short statement by the Sabah Cabinet did not say why but it was obvious that it was due to the two men's involvement with Berjaya. For a larger view of the press clippings, please click on the images.

I would like to end this posting by apologizing for not having filed any 'report' over the last couple of days. This was because I had dinner, dinner and more dinner over the weekend. On last Friday, it was the wedding dinner of a friend's daughter and Saturday it was installation dinner of a service club. More about these dinners in my next postings.

keep the story coming, you may have notice by now, Sikmading followers are gaining momentum. like the others, i appreciate your initiative in digging the past for the younger generation to know what was politics like over 30 years ago. cheers

Thanks, JaBee. FYI, the photostat charges at the state archives is sky high.

welcome to the readership, thank you for linking me.

cheers for now, see u around the cyberspace!